“Musicians, today, if they’re clever, put new compositions out on the web, like pies set to cool on a window ledge, and wait for other people to anonymously rework them. Ten will be all wrong, but the eleventh may be genius. And free. It’s as though the creative process is no longer contained within an individual skull, if indeed it ever was. Everything, today, is to some extent the reflection of something else.”

“Far more creativity, today, goes into the marketing of products than into the products themselves, athletic shoes or feature films.” 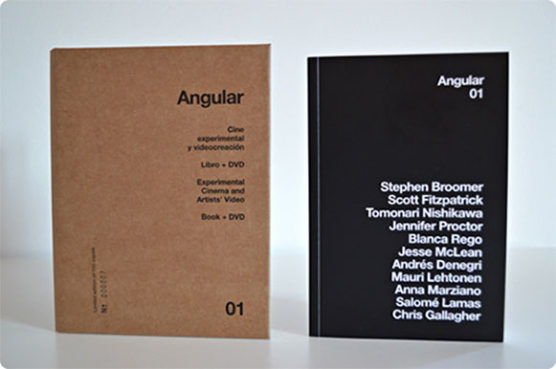 Limited edition of 150 copies. Sleeves are offset printed, individually numbered, and presented in a 400 gr, hand manufactured, Kraft cardboard box. The DVD’s total running time is 122 minutes, with 13 films (one of them is mine), and an 82-page book in both Spanish and English.

“But this will be the end of our civilisation, when people will not work because work has become so intolerable to their senses, it nauseates them too much, they would rather starve. Then we shall see the hammer used only for smashing, then we shall see it. Yet here we are—we have the opportunity to make beautiful factories, beautiful machine-houses—we have the opportunity—”

“Before a message comes on, there is the interminable murmur of the world and the hiss of static; at once no sound and (potentially) all-sounds, murmur and static indicate that the channels are open, ready to receive the signal. In Michael Serres’ words: ‘Background noise is the necessary condition for the transmission of any message: a basic multiplicity of sound which fills the channels and spaces of communication’.”

“If one of the main functions of sound in traditional filmic mimesis is to ‘naturalize’ the image and anchor it in the real, in structural film sound does exactly the opposite. It openly contradicts the visual track, abruptly appears and disappears, or changes tone, quality, or intensity without a clearly visual motivation.”

“They rejected subjectivism, expressiveness, narrative, and direct social reference and focused instead on the medium’s formal and material properties … flicker films were about retinal response to rapidly changing frames … structural film also inquired into the spectator’s perceptual activity … flicker and single-frame films engaged the psycho-physics of vision.” 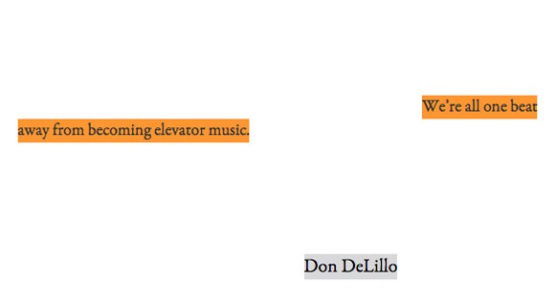 The Paris Review: Don DeLillo, The Art of Fiction No. 135

“Even in the machine, there should be equality. No part should be subordinate to any other part: all should be equal. The instinct for chaos had entered. Mystic equality lies in being, not in having or in doing, which are processes. In function and process, one man, one part, must of necessity be subordinate to another. It is a condition of being. But the desire for chaos had risen, and the idea of mechanical equality was the weapon of disruption which should execute the will of man, the will for chaos.”

“…he had the insidious modern disease of tolerance. He must tolerate everything, even a thing that revolted him. He would call it Life! He would feel he had lived this afternoon. Greedy even for the most sordid sensations.”

“I believe in the fertility of sound.”

“Oh—one would feel things instead of merely looking at them. I should feel the air move against me, and feel the things I touched, instead of having only to look at them. I’m sure life is all wrong because it has become much too visual—we can neither hear nor feel nor understand, we can only see. I’m sure that is entirely wrong.”

“As many philosophers have noted, a void as such is not possible: a void is not the absence of any content but simply the absence of anticipated content. This is why for Bergson, ‘the idea of the absolute nought’ is ‘a self-destructive idea, a pseudo-idea, a mere word’; the void is ‘only a comparison between what is and what could or ought to be, between the full and the full.’ Deleuze echoes this sentiment in his second Cinema book, where he explores the implications of cinematic emptiness. For Deleuze, ‘an empty space, without characters,’ can have ‘a fullness in which there is nothing missing.’ And the idea of the emptiness as a kind of fullness was explored in art before the experimental monochromes of the twentieth century. For example, as Paul Schrader points out, ‘Emptiness, silence, and stillness are positive elements in Zen art, and represent presence rather than the absence of something.’ Monochrome paintings and films simply carry on this tradition, reaffirming Rauschenberg’s assertion that ‘a canvas is never empty.’

a film like Blue does not use the monochromatic screen to merely posit nihilism and emptiness. Rather, Jarman’s blue screen is a site of multiplicity, limitlessness, eternity. As Jim Ellis puts it, Blue ‘recalls Klein’s understanding of the void not as an absence, but rather as an infinity.’

“When seeing a James Bond film … one expects only the exciting parts of Bond’s life to be portrayed: shootouts, explosions, sexual liaisons. One can imagine what the audience reaction might be if—in the interest of realism—a film devoted a substantial amount of time to Bond sleeping, eating a meal, getting a haircut, and using the restroom. Yet these uneventful events constitute the fabric of our existence. One is reminded here of the narrator’s insight in E. M. Foster’s A Passage to India: ‘Most of life is so dull that there is nothing to be said about it, and the books and talk that would describe it as interesting are obligated to exaggerate, in the hope of justifying their own existence'”.

“Television, says Shaviro, ‘is part of our everyday experience; it quietly insinuates itself into our personal lives. We get so deeply involved with television precisely because it doesn’t imperiously demand our attention. It is simply there, day in and day out, like wallpaper or a piece of furniture.'”