Some time ago, Ket3m (Shay Nassi aka Mise En Scene & Tom Kemeny aka Darmock) asked me if I would like to do a promo video for the release of their new ep, entitled syn3rgy. Ket3m involves experiments in minimalism, abstraction and the deconstruction of acoustic mathematical patterns. The ep is yet to be released, but you can listen to one of the tracks in The Wire Tapper 32, included in The Wire 354 August issue.

Ket3m sent me two one-minute excerpts of a couple of tracks and, as I’m obsessed with the relationship between sound and image, I thought that it would be interesting to translate the sounds directly into images. I mean a real transposition, not an arbitrary interpretation. In order to achieve that, I chopped the tracks in very short fragments and I saved all that tiny sound files as jpg to use them as frames. The result are this two videos in which what you see are exactly the same files that what you hear.

I’ve always been obsessed with the relationships between sound and image, and databending is one of the easiest methods to transform a sound track into a still image. I like this approach because it’s an automatic transformation, not a prepared visualization. You don’t decide the outcome, it’s just the result of a mechanical process that you can’t control. Sometimes the resulting images are not very interesting, but sometimes are really mesmerizing.

I’ve been doing this kind of experiments for years and lately I though that maybe it would be interesting to show them in some kind of form, so I created Transsubstantiatio. 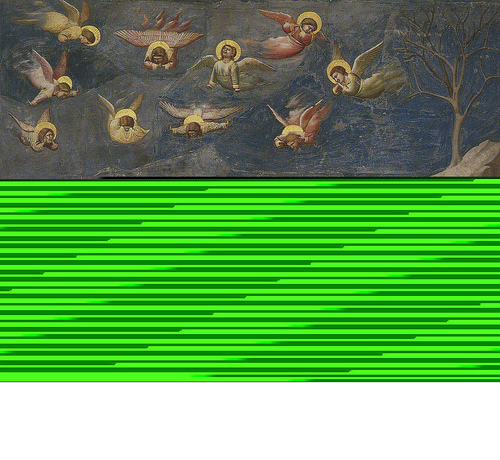 A couple of days ago I downloaded a folder with a lot of classical art pictures and most of them were glitched… This is just one, the rest of them are on my Flickr.