“…Retinal pessimism is not simply the failure of the phenomena of perception, the physiology of the retina, or the science of optics. Nor is it the conviction that whatever one is seeing is the worst of all possible things that could be seen. Both are intriguing options. But, retinal pessimism is something else, and it is encapsulated in the strange status of black: at once present and absent, at once a fullness and an emptiness, at once the absorption of all light and the total absence of light. Black is at once the foundation of all colour and, in its absence or emptiness, it is also what undermines the substantiality of all colour. If one is willing to go down this path, a retinal pessimism is not just about the non-colour that is black, but it is about the perception of colour itself. It is, ultimately, the suspicion that all colours are black, that all retinal activity is retinal inactivity. Retinal pessimism: there is nothing to see (and you’re seeing it)…” 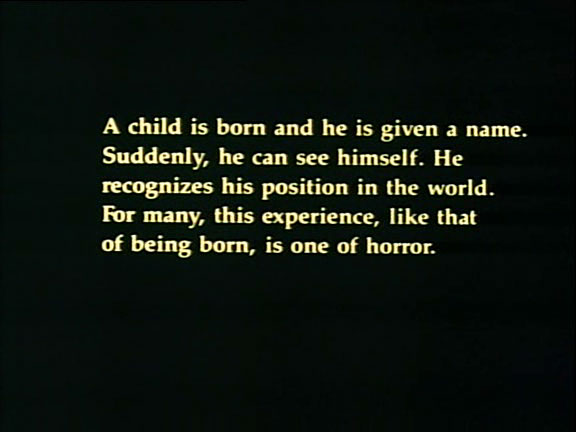 I think that Poison was the first film I watched by Todd Haynes, many years ago. I’ve seen all his films and I like all of them, but Poison and Velvet Goldmine hold a special place in my heart (Velvet Goldmine is probably on my top 10 favourite films of all times).

Definition of hearinghearing
: the activity of listening to places of interest in a particular location

Simple Definition of ear–opener
: something that shows or teaches you something in a loud way

Full Definition of ear–opener
1
: a sound intended to wake one up
2
: something ear-aching, ear-piercing, or ear-splitting (her noise is a real ear–opener)

“Yuan (simplified Chinese: 缘; traditional Chinese: 緣) or Yuanfen (simplified Chinese: 缘分; traditional Chinese: 緣分; pinyin: yuánfèn; Vietnamese: duyên phận), ‘fateful coincidence,’ is a concept in the Chinese folk religion describing good and bad chances and potential relationships. It can also be translated as ‘destiny, luck as conditioned by one’s past,’ or ‘natural affinity among friends.’ It is comparable to the concept of karma in Buddhism, but yuanfen is interactive rather than individual.

“Yuan (缘) or Yuanfen (缘份) is a Buddhist-related Chinese concept that means the predetermined principle that dictates a person’s relationships and encounters, usually positive, such as the affinity among friends or lovers. In common usage the term can be defined as the ‘binding force’ that links two persons together in any relationship. The concept of synchronicity from the Swiss psychologist Carl Jung can be seen as similar to yuanfen, which Chinese people also believe to be a universal force governing the happening of things to some people at some places. Yuanfen belongs to the family of concepts known in theology as determinism.”

“The term makyo (魔境 makyō) is a Zen term that means ‘ghost cave’ or ‘devil’s cave.’ … Makyo is essentially synonymous with illusion, but especially in reference to experiences that can occur within meditation practice.

…the combination of ma meaning devil and kyo meaning the objective world. This character for ‘devil’ can also refer to Mara, the Buddhist ‘tempter’ figure; and the character kyo can mean simply region, condition or place. Makyo refers to the hallucinations and perceptual distortions that can arise during the course of meditation … These can occur in the form of visions and perceptual distortions, but they can also be experiences of blank, trance-like absorption states.

…It is characterized in some schools as ‘going to the movies,’ a sign of spiritual intensity but a phenomenon that is considered distinctly inferior to the clear insight of settled practice.”

In psychology and psychiatry, anhedonia (/ˌænhiˈdoʊniə/ an-hee-doh-nee-ə; Greek: ἀν– an-, “without” and ἡδονή hēdonē, “pleasure”) is defined as the inability to experience pleasure from activities usually found enjoyable, e.g. exercise, hobbies, music, sexual activities or social interactions. While earlier definitions of anhedonia emphasized pleasurable experience, more recent models have highlighted the need to consider different aspects of enjoyable behavior, such as motivation or desire to engage in an activity (“motivational anhedonia”), as compared to the level of enjoyment of the activity itself (“consummatory anhedonia”).

“travel (v.)
late 14c., ‘to journey,’ from travailen (1300) ‘to make a journey,’ originally ‘to toil, labor’. The semantic development may have been via the notion of ‘go on a difficult journey,’ but it also may reflect the difficulty of any journey in the Middle Ages. Replaced Old English faran.”

“Hybristophilia ‘is a paraphilia of the predatory type in which sexual arousal, facilitation, and attainment of orgasm are responsive to and contingent upon being with a partner known to have committed an outrage, cheating, lying, known infidelities or crime, such as rape, murder, or armed robbery.’ The term is derived from the Greek word ὑβρίζειν hubrizein, meaning ‘to commit an outrage against someone’ (ultimately derived from ὕβρις hubris ‘hubris’), and philo, meaning ‘having a strong affinity/preference for’. In popular culture, this phenomenon is also known as ‘Bonnie and Clyde Syndrome’.”

“The term scotomization comes from the Greek noun skotos (darkness). In the older literature it is used as a synonym for the term negative hallucination. Both terms are used to denote the failure to perceive an object or stimulus that is present within one’s range of perception. The term scotomization was introduced in or shortly before 1926 by the French psychoanalysts Edouard Pichon (1890-1940) and René Laforgue (1894-1962). In psychoanalytic theory, the term scotomization is used to denote the tendency to ignore, or to be blind to, certain impulses or memories, especially those experienced as a threat to the individual’s ego.”

Enstasy (Gk., en-stasis, ‘standing into’). The experiences, or abolition of experience, arising as a consequence of those meditational, etc., techniques which withdraw the practitioner from the world, and even from awareness of the self.

Enstasis (noun): Contemplation of one’s own self.

“Creative geography, or artificial landscape, is a film making technique invented by the early Russian filmmaker Lev Kuleshov sometime around the 1920s. It is a subset of montage, in which multiple segments shot at various locations and/or times are edited together such that they appear to all occur in a continuous place at a continuous time.”

English as She Is Spoke is the common name of a 19th century book written by Pedro Carolino and falsely additionally credited to José da Fonseca, which was intended as a Portuguese-English conversational guide or phrase book, but is regarded as a classic source of unintentional humour, as the given English translations are generally completely incoherent. Carolino added Fonseca’s name to the book without the latter knowing about it. Fonseca had written a successful Portuguese-French phrase book, which Carolino adapted.

The humour appears to be a result of dictionary-aided literal translation, which causes many idiomatic expressions to be translated wildly inappropriately. For example, the Portuguese phrase chover a cântaros is translated as raining in jars, whereas an idiomatic English translation would be raining buckets.

Mark Twain said of English as She Is Spoke that “Nobody can add to the absurdity of this book, nobody can imitate it successfully, nobody can hope to produce its fellow; it is perfect.”

Wikipedia
Complete facsimile of English as She Is Spoke (1883)

“An urawaza (Japanese for “secret trick”) is a quirky, ingenious technique that optimizes an everyday activity like cleaning up spills, preventing odors, or folding laundry. In Japan, urawaza have been shared by word of mouth and passed down to descendants for centuries. In the aftermath of World War II, urawaza helped the population make best use of scarce resources, like using alcohol instead of more expensive household solvents for cleaning. Lifestyle urawaza were popularized in the Japanese television series Ito-ke no Shokutaku (The Ito Family Dinner Table), incorporating many viewer-submitted tips. The term itself became globally popularized when video gamers in the 1980s began sharing their game-related urawaza online.”

“Resonance” is a central operative principle of the cosmos as conceived by the Huainanzi. The phrase itself means “stimulus” (gan 感) and “response” (ying 應), which is how we have translated it when the Huainanzi refers specifically to the discrete component processes that the term denotes. Fundamentally, “resonance” is a process of dynamic interaction that transcends the limits of time, space, and ordinary linear causality. Through the mechanism of resonance, an event in one location (the “stimulus'”) produces simultaneous effects in another location (the “response”), even though the two phenomena have no direct spatial or mechanical contact. They may indeed be separated by vast gulfs of space. For example, connections between celestial events (eclipses, planetary motions) and events in the human community were understood as examples of “resonance”.

For the authors of the Huainanzi, such connections were not coincidence or mere correspondence but dynamic influences exchanged through the energetic medium of qi. All phenomena are both composed of and impelled by qi, and since all currently differentiated qi emerged from an originally undifferentiated Grand One, all qi remains mutually resonantly linked. The pathways of resonance are not random, however. Objects are most sensitive to resonant influences emanating from other objects that share the same constituent form of qi.

The best example of this is an empirically observable phenomenon often cited by ancient authors to illustrate the concept of resonance itself: the harmonic resonance observable among musical instruments. If a string tuned to the pentatonic note gong on one qin is plucked, for example, the corresponding string on a separate qin will be perceived to vibrate. This was thought to occur because of the presence of Earth qi which is responsible for the note gong in both instruments. When the Earth qi in the first instrument is activated (the stimulus), the corresponding Earth qi note in the other resonates (the response).

Such interactions were thought to be operative in the universe at all times. Someone who understood the patterns of these interactions could manipulate them to produce marvelous and beneficial effects across space-time.”

“The Streisand effect is a primarily online phenomenon in which an attempt to hide or remove a piece of information has the unintended consequence of publicizing the information more widely. It is named after American entertainer Barbra Streisand, whose attempt in 2003 to suppress photographs of her residence inadvertently generated further publicity.”

“The hedgehog’s dilemma, or sometimes the porcupine dilemma, is an analogy about the challenges of human intimacy. It describes a situation in which a group of hedgehogs all seek to become close to one another in order to share heat during cold weather. They must remain apart, however, as they cannot avoid hurting one another with their sharp quills. Though they all share the intention of a close reciprocal relationship, this may not occur for reasons they cannot avoid.”