I wonder if this is why I love walking without a destination.

“The flâneur doesn’t walk to get somewhere, but to observe the passing scene; he is a consumer of images, responding to the world as if it were cinema.”

“In England, walking about at night was a crime for a very long time. William the Conqueror ordained that a bell should be rung at 8 p.m., at which point Londoners were supposed to put their fires and candles out and their heads down. Again and again, until modern times, Matthew Beaumont tells us, specifically nocturnal laws were promulgated against draw-latchets, roberdsmen, barraters, roysterers, roarers, harlots and other nefarious nightwalkers — including those ‘eavesdroppers’ who stood listening in the close darkness where the rain dripped from a house’s eaves.

Beaumont reads such laws as being designed to exert political and social control. To walk the city streets at night, by contrast, is to make ‘a libertine assault on what might be called the ideology of good hours’, to pose ‘an intrinsic challenge to the diurnal regime on which, from the end of the Middle Ages, Protestant ideology and the political economy of capitalism partly depended’. Nightwalking is sticking it to the Man.”

Dickens’s dark side: walking at night helped ease his conscience at killing off characters, The Spectator.

Nightwalking: A Nocturnal History of London by Matthew Beaumont.

“Thoreau wrote in a letter that when considering a course of action, one should ask: ‘Could someone else do it in my place?’ If the answer is yes, abandon the idea, unless it is absolutely essential. But it is still not bound up in the inevitable part of life. Living, in the deepest sense, is something no one else can do for us. You can be replaced at work, but not for walking. That’s the great difference.”

A Philosophy of Walking, Frederic Gros.

“Many who’ve written about mazes and labyrinths distinguish between the two of them. Mazes, including most garden mazes, have many branchings and are made to perplex those who enter, whereas a labyrinth has only one route, and anyone who stays with it can find the paradise of the center and retrace the route to the exit. Another metaphorical moral seems built into these two structures, for the maze offers the confusions of free will without a clear destination, the labyrinth an inflexible route to salvation.”

“Many people nowadays live in a series of interiors—home, car, gym, office, shops—disconnected from each other. On foot everything stays connected, for while walking one occupies the spaces between those interiors in the same way one occupies those interiors. One lives in the whole world rather than in interiors built up against it.”

“An Eskimo custom offers an angry person release by walking the emotion out of his or her system in a straight line across the landscape; the point at which the anger is conquered is marked with a stick, bearing witness to the strength or length of the rage.”

I’ve always loved walking, specially in urban environments, so I’m always thinking about doing artworks related to that. I’ve recorded some sound walks, usually in the rain, but I haven’t done anything really thorough, it was just a pastime. Last month, I made a short video while I was walking and the result is quite strange. I recorded the video with an iPod Touch using an app called 8mm. As the iPod camera is not very good and the original frame rate of the video was just 15 fps, the result is quite interesting, almost like an abstract pattern.

Now I’m thinking about doing something with more videos of this kind, the title will be Solvitur ambulando, a latin phrase that means “it is solved by walking”.

“This act of walking is an urban affair and, in cities that are increasingly hostile to the pedestrian, it inevitably becomes an act of subversion. Walking is seen as contrary to the spirit of the modern city with its promotion of swift circulation and the street-level gaze that walking requires allows one to challenge the official representation of the city by cutting across established routes and exploring those marginal and forgotten areas often overlooked by the city’s inhabitants. In this way the act of walking becomes bound up with psychogeography’s characteristic political opposition to authority, a radicalism that is confined not only to the protests of 1960s Paris but also to the spirit of dissent that animated both Defoe and Blake as well as the vocal criticism of London governance to be found in the work of contemporary London psychogeographers such as Stewart Home and Iain Sinclair.”

“The Situationist concept of “psychogeography” had its roots in the aimless Surrealist drifts through Paris described in Breton’s 1928 novel Nadja and in Louis Aragon’s 1926 novel Le Paysan de Paris, and meant a purely subjective, para-scientific exploration of (chiefly) urban spaces through aimless drift. The surrealist drifts in turn were indebted to the romanticist “flâneur,” a wanderer “botanising the asphalt” as cultural theorist Walter Benjamin put it in his essay on 19th century poet Charles Baudelaire.” 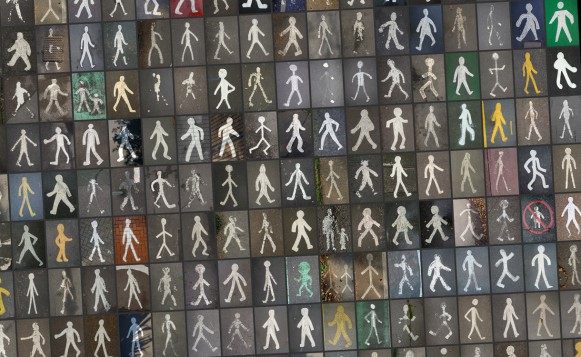 A project begun in 2004 by Stephen Wragg to document the unique diversity of painted ‘walking men’ on the streets of the UK.

Definition of SAUNTER
intransitive verb
: to walk about in an idle or leisurely manner : stroll

Examples of SAUNTER
1. They sauntered slowly down the street.
2. He sauntered into the store.

Origin of SAUNTER
probably from Middle English santren to muse
First Known Use: circa 1667

• Sensorium
Edited by Caroline A. Jones

“When sometimes I am reminded that the mechanics and shopkeepers stay in their shops not only all the forenoon, but all the afternoon too, sitting with crossed legs, so many of them —as if legs were made to sit upon, and not to stand or walk upon— I think that they deserve some credit for not having all committed suicide long ago.”

Solvitur ambulando = It is solved by walking. (Latin proverb)